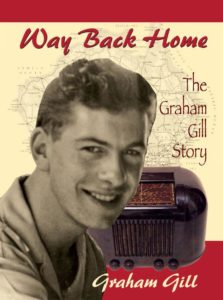 Graeme Gilsenan, born April 15th 1936 in Williamstown Australia, the proud son of George Robert Gilsenan and Rhoda Jean Heap. Found his career within the radio industry. First in Australia an from the mid sixties of last century in Europe. Stations like Radio London, Swinging Radio England, Britain Radio, Radio 390, Radio Caroline, RNI and Radio Netherlands were glad to have him in their presentaion team. At 74 years he revealed his life story in "Way Back Home, The Graham Gill Story". He died just before his 82th birthday on April 9th 2018.

To order the book, go to: https://forms.gle/WeJc6pA7Av1dnQRA8